A sensitive, accurate and standardized method for MRD detection and monitoring

The clonoSEQ® Assay is a robust, highly-validated tool for identifying and monitoring measurable residual disease (MRD) in lymphoid malignancies.[1] Across a variety of large, multi-center clinical trials, clonoSEQ has generated a wealth of peer-reviewed clinical evidence in disease states including multiple myeloma (MM), B-cell acute lymphoblastic leukemia (ALL), and chronic lymphocyticleukemia (CLL).[2,3]

Evaluate use of clonoSEQ MRD testing for prognostic evaluation by correlating MRD results to PFS.[4]

The clonoSEQ Assay can predict progression-free survival in myeloma patients

MRD negativity* (as measured by clonoSEQ at 10-5 threshold) was associated with longer PFS than MRD positivity, regardless of the treatment received

In the ALCYONE (NCT02195479) study of 706 patients with newly diagnosed, transplant-ineligible multiple myeloma, patients received bortezomib, melphalan, and prednisone (VMP) with or without daratumumab (D-VMP). Patients were assessed by clonoSEQ (at a sensitivity level of 10-5) at study screening, and time of CR/sCR, as well as at 12, 18, 24, and 30 months in patients who had achieved a CR/sCR following initiation of induction. After 18 months of follow-up, the proportion of MRD-negative patients in the experimental treatment arm was more than three times higher than in the control group (22.3% versus 6.2%, P<0.001; Figure 1). Additionally, regardless of treatment arm, MRD-negative patients had longer PFS than MRD-positive patients (Figure 2).[5] The MRD negativity rate data from this study has been incorporated in an FDA-approved product label for the treatment of newly-diagnosed, transplant-ineligible multiple myeloma patients.[6] 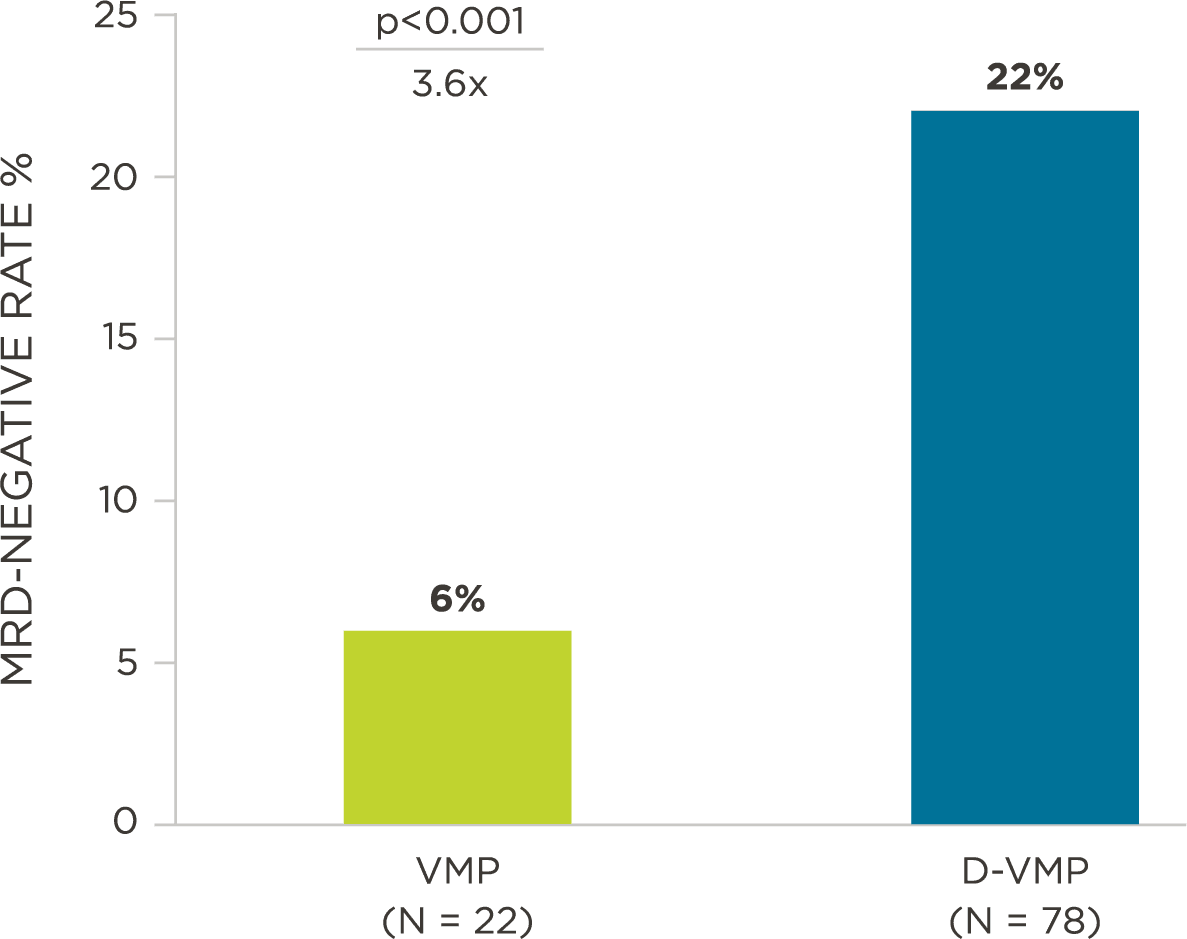 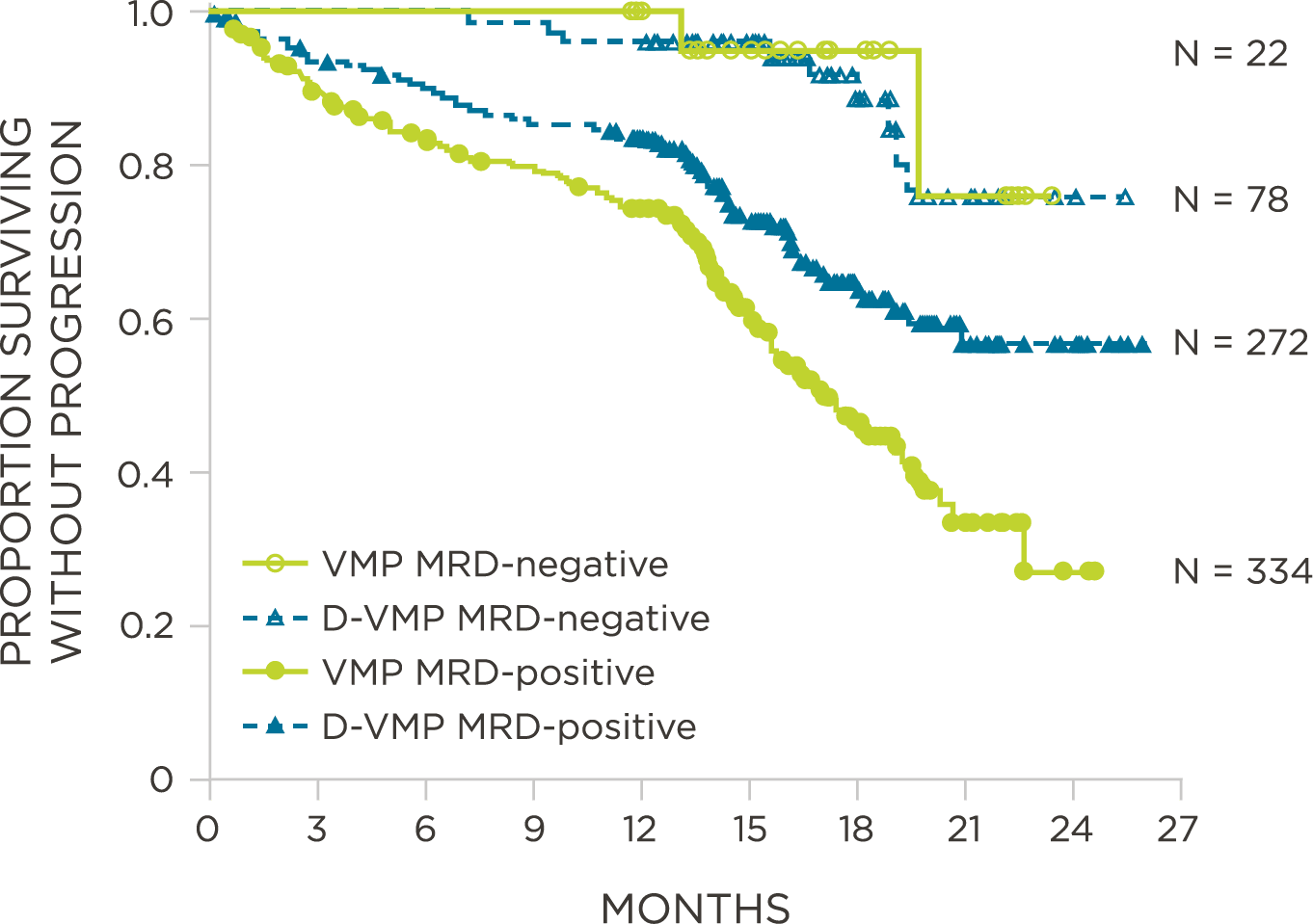 The POLLUX study assessed 569 relapsed and refractory multiple myeloma patients to determine if the addition of daratumumab to lenalidomide and dexamethasone (Rd) resulted in prolonged progression-free survival. MRD was assessed at three MRD thresholds (10-4 to 10-6) by clonoSEQ at the time of suspected complete response (CR). At three evaluated thresholds, MRD negativity by clonoSEQ was associated with longer PFS relative to MRD positivity (Figure 3, 10-6 threshold shown). Additionally, the rate of MRD negativity at all evaluated thresholds (10-4, 10-5, 10-6) was significantly higher in the experimental treatment arm than in the control arm (by 3-5x). Specifically, at an MRD threshold of 10-5, the rate of MRD negativity was 22.4% in the experimental group (DRd) versus 4.6% in the control group (Rd; P<0.001).[7] 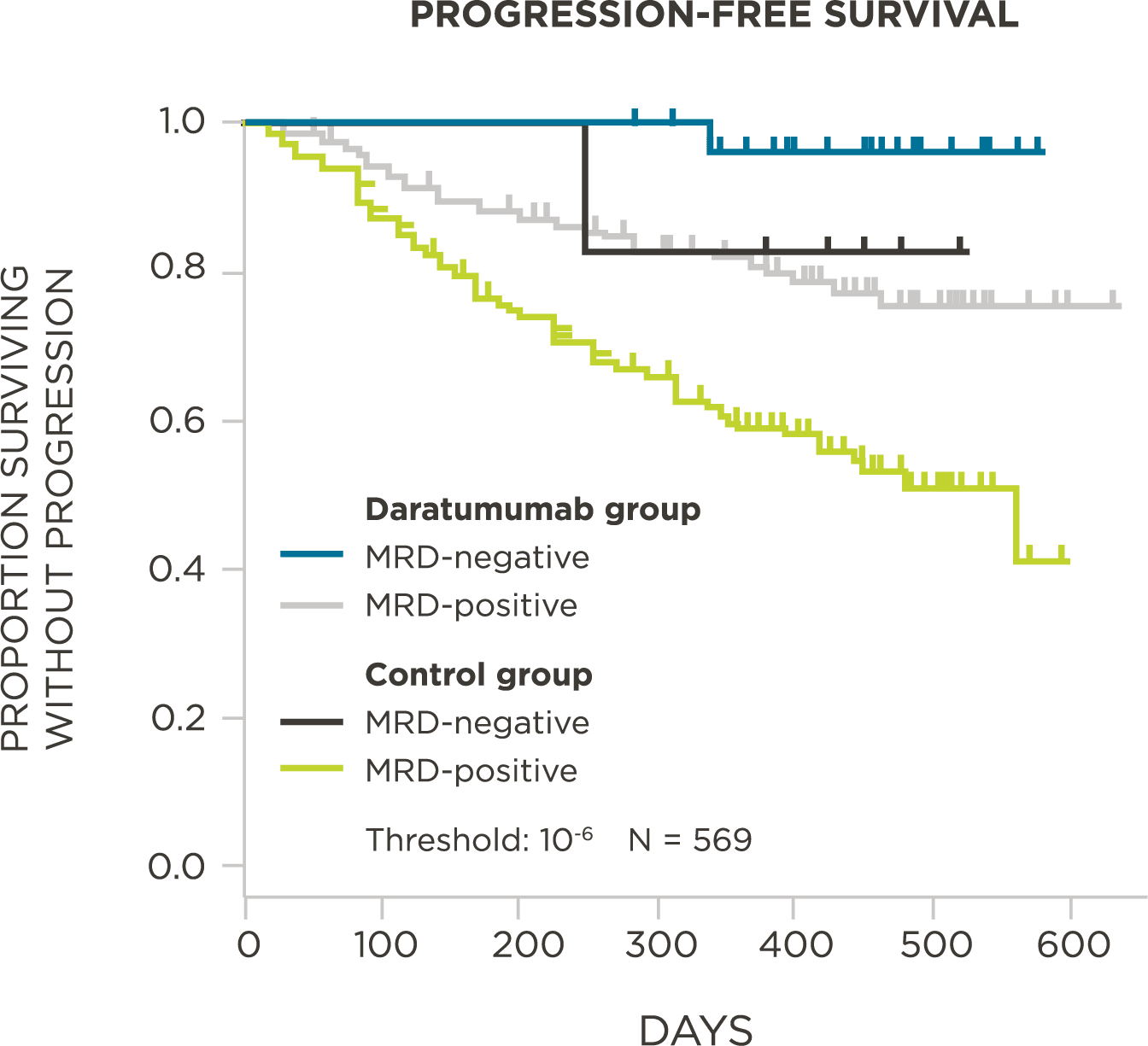 The clonoSEQ Assay has prognostic value in Multiple Myeloma

A study of 133 patients on GEM clinical trials (GEM00, GEM05, and GEM2010) found that MRD assessment by NGS was prognostic for time to progression (TTP; Figure 4) and overall survival (OS; Figure 5).[8]

Figure 6: Correlation of pre-maintenance MRD, assessed by flow cytometry and clonoSEQ, to PFS

Figure 7: Correlation of post-maintenance MRD, assessed by flow cytometry and clonoSEQ, to PFS

clonoSEQ MRD testing identified additional MRD-positive patients who were MRD-negative by flow cytometry in this study. 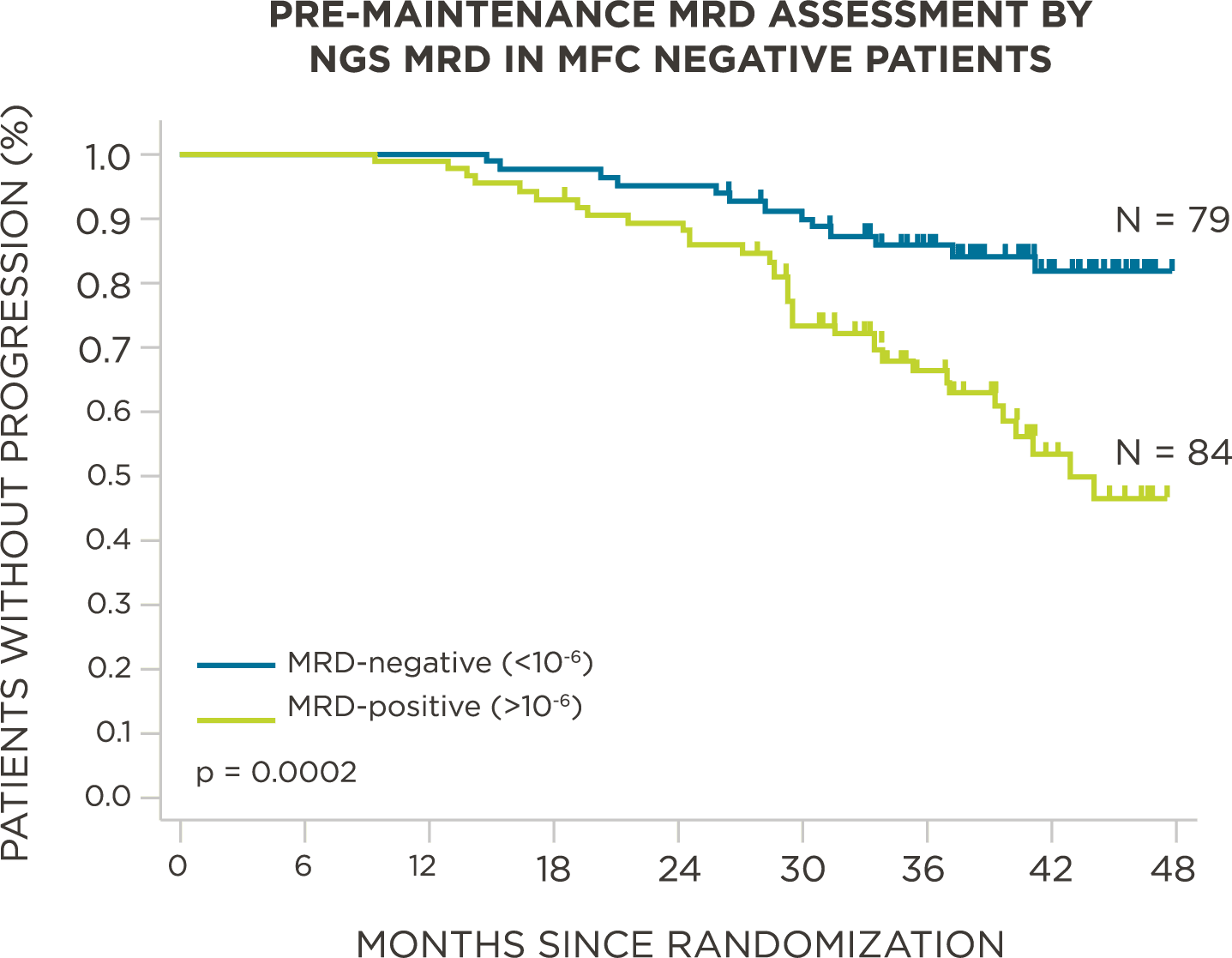 Figure 8: Pre-maintenance assessment of MRD by NGS in patients who were MRD-negative by flow cytometry

Post-maintenance, 232 patients had no detectable MRD by flow cytometry, of which 111 were then assessed by clonoSEQ. Of these 111 patients, 42 were identified as MRD-positive by clonoSEQ. These patients had worse PFS compared to patients who were MRD-negative by flow and clonoSEQ (P=0.0006, Figure 9).[9] 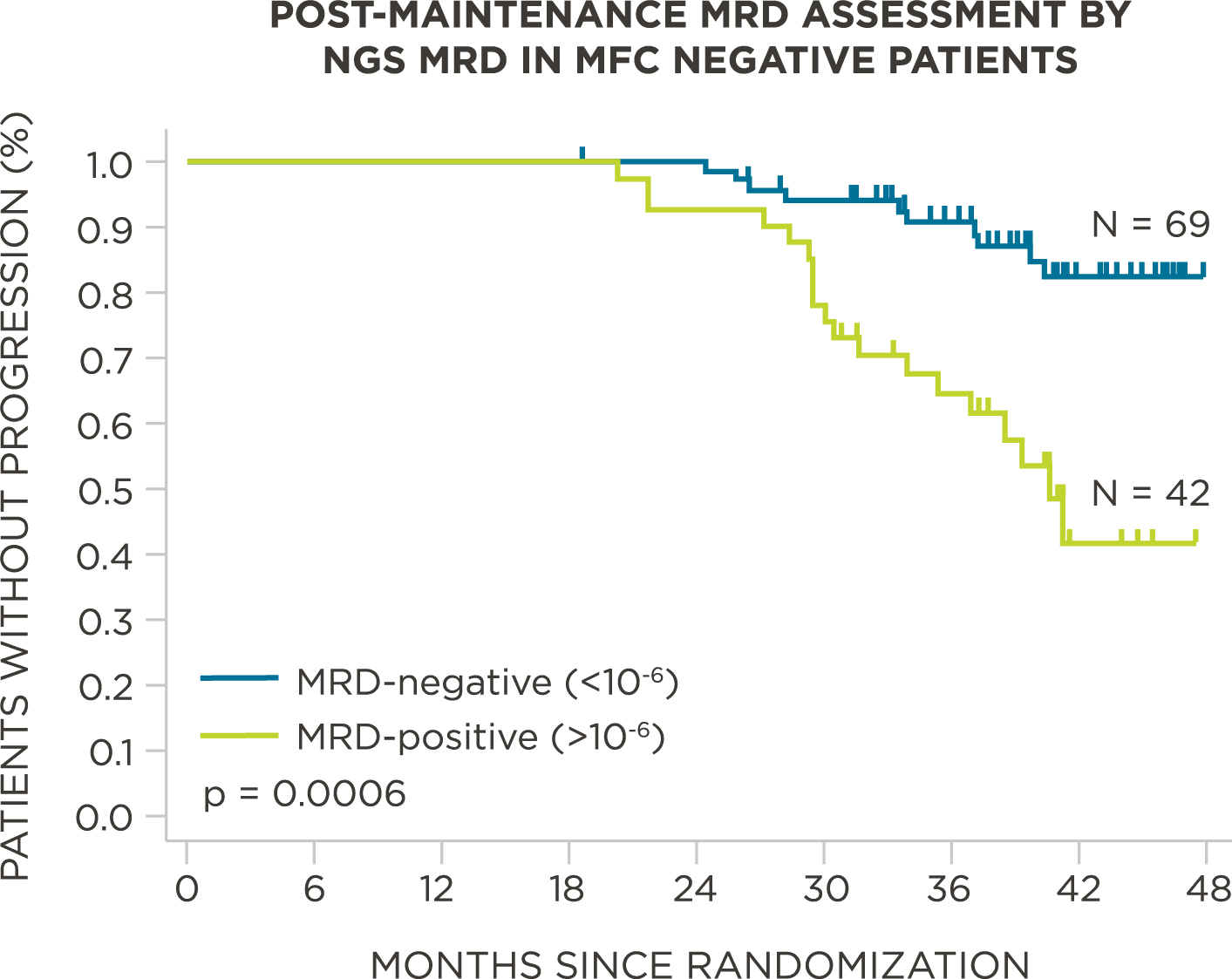 Figure 9: Post-maintenance assessment of MRD by NGS in patients who were MRD-negative by flow cytometry

NCCN Clinical Practice Guidelines in Oncology (NCCN Guidelines®) recommend MRD testing as a Category 2A recommendation for multiple myeloma patients after each treatment stage (e.g., induction, high-dose therapy/ASCT, consolidation, maintenance) at times of suspected complete response. Next-generation sequencing (NGS) is specifically included in these guidelines among the recommended tools for MRD assessment.[10] International response criteria, including IMWG and ESMO, also specifically include MRD negativity by NGS as a measure of disease response in myeloma.[4,11]

This study demonstrated that 55 patients who had no detectable MRD by flow cytometry and who were MRD-positive by NGS had a worse EFS than those who were MRD-negative by NGS and had no detectable MRD by flow cytometry (threshold of 10-4). Using an MRD cutoff level of 10-4, flow cytometry identified 17 patients as MRD-positive that NGS identified as MRD-negative. When those 17 patients were assessed at an MRD cutoff level of 10-5, NGS identified residual disease in 11 of these patients. Additionally, NGS MRD (threshold of 10-4) was able to predict EFS in the standard risk subgroup. Patients who were NGS MRD-negative had longer EFS compared to the NGS MRD-positive patients (P=0.0226).[3]

Table 1: Comparison between the clonoSEQ assay and flow cytometry (both assessed at 1/10,000)[3]

3. Wood B, et al. Blood. 2018;131(12):1350-1359.
* Per ALL clinical practice guidelines, MRD negativity is defined as the absence of detectable cancer cells using a method with a minimum sensitivity of 10-4 nucleated cells or higher.[1] MRD status should be evaluated in the context of clinical clinopathological features and is not a determination of the absence of disease.

Peer-reviewed publications show advantages to using clonoSEQ in ALL:

In one study, clonoSEQ was shown to be superior to flow cytometry in predicting post treatment relapse and survival.[13]

In one study, clonoSEQ was shown to be superior to flow cytometry in predicting post treatment relapse and survival.<sup>[13]</sup>

In this analysis of pre-transplant bone marrow samples from 41 pediatric patients with ALL, it was found that clonoSEQ MRD detection predicted relapse and overall survival post-allogeneic transplant significantly better than 6-color flow cytometry (Table 2).[13] 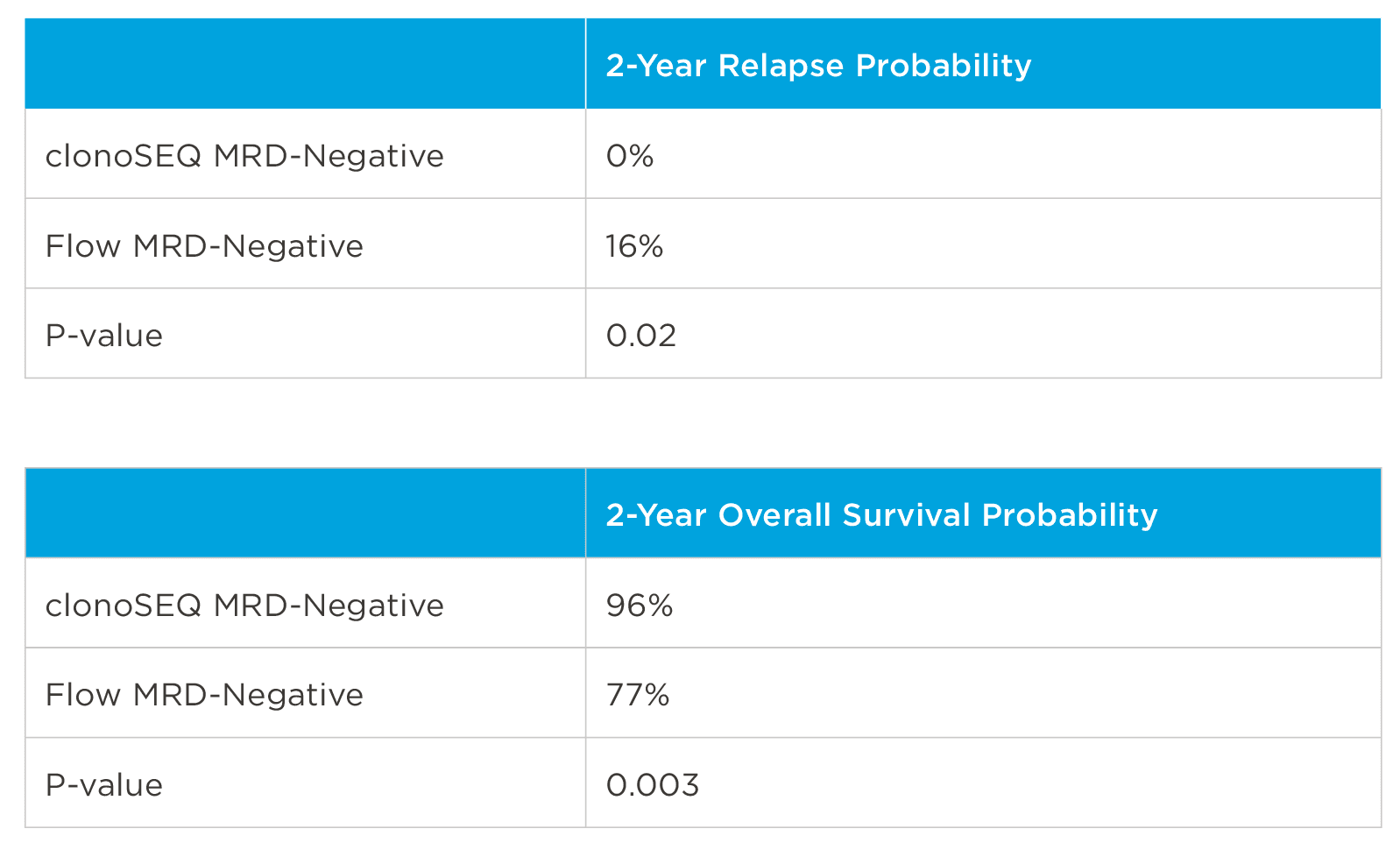 clonoSEQ may be used to predict relapse and disease free survival in the post-transplant setting.[13]

Analysis of bone marrow samples from 53 pediatric patients analyzed post-allogeneic transplant showed that clonoSEQ may be used to predict relapse. In the case of discordant MRD determinations, there were 11 patients identified as clonoSEQ MRD-positive and flow cytometry MRD-negative and 3 patients identified as clonoSEQ MRD-negative and flow cytometry MRD-positive.[13]

One month after transplant, flow cytometry was unable to distinguish between patients who ultimately relapsed and those who did not (p=0.91; Figure 3). NGS MRD showed an estimated relapse probability of 67% in MRD-positive patients vs. 25% in MRD-negative patients (p=0.01).[13]

clonoSEQ is concordant with traditional methods for MRD detection and offers increased sensitivity.[12]

In a study of more than 100 pediatric ALL patients, the clonoSEQ Assay showed quantitative concordance with both flow cytometry and allelespecific oligonucleotide PCR (ASO-PCR; Figure 2).[12]

The clonoSEQ Assay was able to detect additional patients with disease present below the detection limits of flow cytometry (N=10) and ASO-PCR (N=3), respectively (Figure 2, red boxes).[12] ASO-PCR identified one patient with residual disease that was MRD-negative by clonoSEQ.[12]

Figure 2: Comparison between sequencing and flow cytometry and ASO-PCR. The number of concordant measurements are shown in the lower left and upper right. The number of discordant measurements are shown in the upper left and lower right. Boxed numbers highlight increased sensitivity provided by NGS MRD detection over other methods.

NCCN Clinical Practice Guidelines In Oncology (NCCN Guidelines®) for ALL recommend MRD testing at a sensitivity of 10-4 or better because of its clinical utility.[14,15] Next-generation sequencing (NGS) is listed as one of the recommended methods for MRD assessment in these Guidelines.[16]

Evaluate use of clonoSEQ MRD testing for prognostic evaluation by correlating MRD results to PFS.[1]

clonoSEQ predicts outcomes three months after the completion of therapy 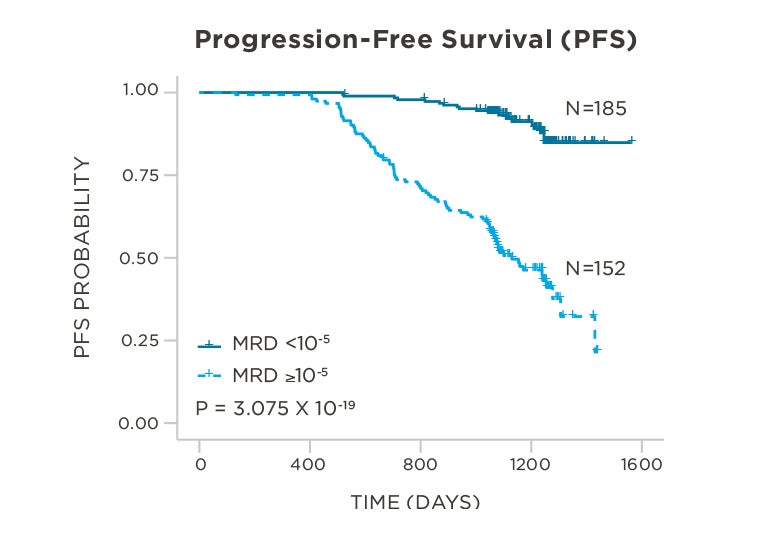 Figure 1: Kaplan-Meier survival curves for PFS given clonoSEQ MRD detection at a threshold of 10-5 three months after completion of therapy

Lower levels of MRD are correlated with better outcomes

When assessing the correlation between clinical outcomes and continuous clonoSEQ MRD measurements (vs. a pre-definied sensitivity threshold), a patient’s risk of an event was shown to increase by 2.15-fold for every 10-fold increase in MRD (95% CI: 1.86-2.48). 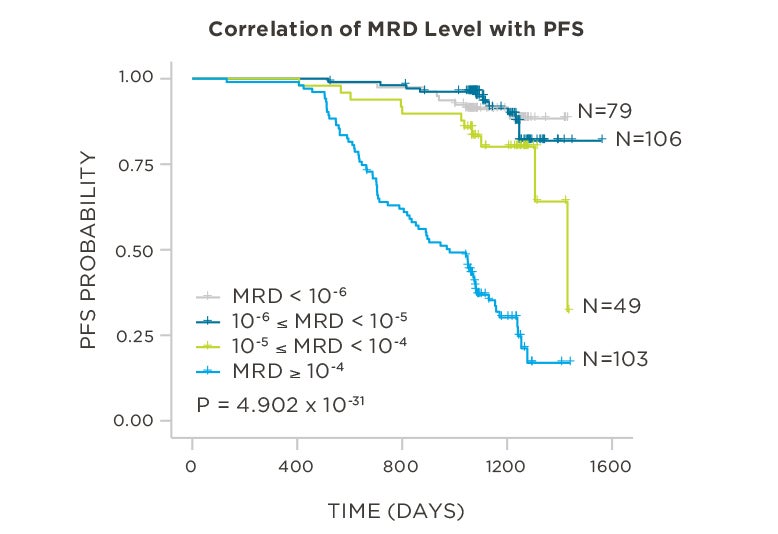 CONCORDANCE BETWEEN BLOOD AND BONE MARROW

In bone marrow samples, clonoSEQ is predictive of PFS

Thompson et al assessed 62 previously untreated CLL patients who received therapy with fludarabine, cyclophosphomide, and rituximab (FCR). These patients were initially determined to be U-MRD by 4-color flow cytometry at an MRD threshold of 10-4. From these patients, 57 bone marrow (BM) samples were evaluated at the end of treatment by clonoSEQ. Patients who achieved the lowest levels of MRD in the bone marrow (10-5 – 10-6) or who had a U-MRD status (<10-6) experienced the best outcomes. Patients who had a U-MRD status at a threshold of < 10-5 had superior PFS compared to patients with MRD ≥ 10-5 (P = 0.01; Figure 3).[17] 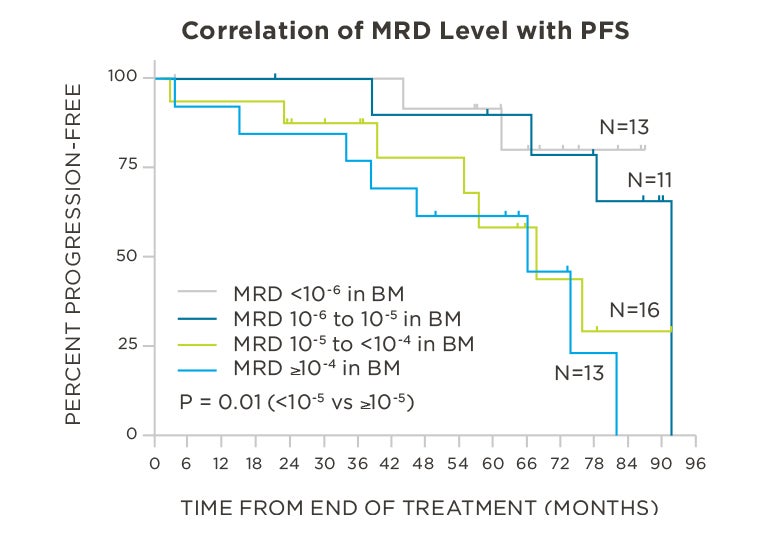 Figure 3: Patients who had a U-MRD status at a threshold of <10-5
had longer PFS compared to MRD-positive patients (≥10-5)

clonoSEQ predicts outcomes in both blood and bone marrow

An expanded analysis of the Thompson et al data set supported the clinical validation of clonoSEQ. This data shows a significant association between PFS and continuous clonoSEQ MRD measurement (vs. at a pre-specified sensitivity threshold) in both blood and bone marrow, after end of treatment (P= 9.6x 10-4 for blood; P= 2.13 x 10-4 for bone marrow). Additionally, patients who had U-MRD status at a threshold < 10-6 had superior PFS compared to patients with MRD ≥ 10-6 (P = 7.74 x 10-2 for blood, Figure 4A; and P = 8.10 x 10-2 for bone marrow, Figure 4B).[1]

Figure 4A and B: Patients with U-MRD (<10-6) had longer PFS compared to patients with detectable MRD whether assessed in blood or bone marrow

NCCN Clinical Practice Guidelines In Oncology (NCCN Guidelines®) for CLL recommend MRD testing at a sensitivity of at least 10-4. Next-generation sequencing (NGS) is listed as one of the recommended methods for MRD assessment.[18]

This page is intended for use by healthcare professionals outside of the United States.

The clonoSEQ Assay B-cell Reagent Set is an in vitro diagnostic that identifies and quantifies rearranged B-cell receptor gene sequences in DNA extracted from blood and bone marrow.

It is a manual test that determines measurable/minimal residual disease (MRD) and monitors changes in disease burden during and after treatment in B-cell malignancies. The test is indicated for use by qualified healthcare professionals for clinical decision-making and in conjunction with other clinicopathological features.

The clonoSEQ Assay is being utilized for a variety of investigator-sponsored clinical trials in B-cell lymphoid cancers. If you are interested in learning more about use of clonoSEQ in your own trials, contact dxsupport@adaptivebiotech.com.

Make an inquiry to learn more about our products.

This content is intended for use by healthcare professionals outside of the United States.

I attest that I am a healthcare professional

Other visitors, please return to the clonoSEQ homepage.

I am a registered user, please take me to the Diagnostic Portal.

Please select your location to continue:

United States Outside the U.S.